Skip to main content
It looks like you're using Internet Explorer 11 or older. This website works best with modern browsers such as the latest versions of Chrome, Firefox, Safari, and Edge. If you continue with this browser, you may see unexpected results.

Introduction to "The Bluebook: A Uniform System of Citation": Statutes

This guide is currently being updated to reflect the recent changes made in The Bluebook (20th edition). Please be aware that pages containing this notice may contain out-of-date information.

Basic Structure of a Statute Citation 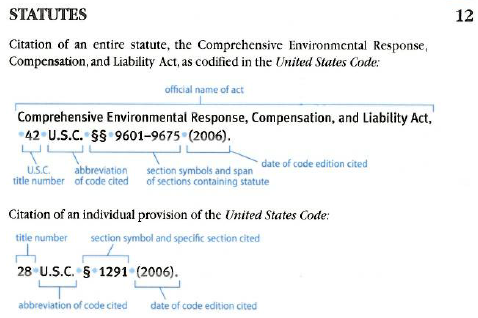 The basic structure of a statute citation has three main elements:

Generally - Whenever possible, cite to the current official code. Otherwise, cite a current unofficial code or supplement. Abbreviations for code titles can be found in Table 1.

Special Citation Forms - Restatements, model codes, and several other authorities are covered by Rule 12.9. Abbreviate according to Table 6.

Short Form for Statutes - Rule 12.10 provides a chart listing short forms for different types of code provisions. In law review footnotes, short form may only be used for a statute cited within the same footnote or if it has been cited within the five previous footnotes. Otherwise a full citation is required. See Rule 4.1 for guidance on the use of "id." within citations.

Only abbreviate words in Table 1 (Jurisdictional conventions), Table 16 (subdivisions), and Table 6 (Institutional Authors) when citation is used in a footnote. If a code provision is referred to in a textual sentence, the citation must be written out fully, or the provision referred to by name according to Rule 12.10.

Except when referring to a United States Code provision, the word "section" should be spelled out in textual sentences, but the "§" symbol is appropriate for footnote citations.

Do not use "at" if citing a different section of the statute. Instead, use "Id." and the new section or subsection.